My hooman sister was home from Oklahoma for the weekend, and my hooman cousin, who is at Bradley University, came to visit.  We played this game called Pandemic – which is about preventing a disease from destroying the world.  It’s a collaborative game, which means all the players play together for a common goal.  Personally, I like to go solo, cause I’m a loner – a rebel – but I guess this new-age touchy feely we are all in this together why can’t we all get along a stranger is a friend we haven’t met yet culture isn’t big on cut-throat throw that witch off the cliff and see if she flies capitalism.  Sigh.  Welcome to Obama’s America I suppose.

Above –  me and my cousin are conferring about our next move.  The epidemic is getting fierce in Asia.  Watch out my Scottie buddies Ruffles & Munchkin in Singapore! 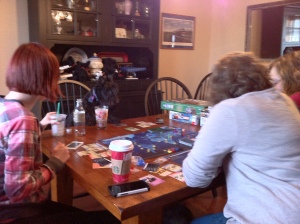 Ruh Roh – above we fixed the epidimic is Asia, but now it is trying to get a foothold in Paris.  Watch out my friends Figaro and Arsene in France! 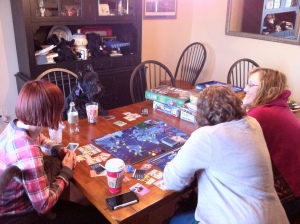 Crisis in Europe averted – but oh oh, what’s this?  A breakout in  Brazil!  Watch out Raica and Logan in Sao Paulo!

It was a near thing, but we managed to pull out it out on the last move of the game.  Your Welcome, World!  Me and my cousin Summer are engaging in a celebratory Stare-Off!