I know it’s not Time Travel Thursday, but I was just killing some time, between waiting for overseas phone calls from import/exporters in Perth, Australia, and our third world product manufacturing facilities in…let’s see, Mexico?  No that was a few years ago.  Indonesia?  Nope, so 2010!  China?  Heck no, getting too expensive. Malaysia?  Are you kidding me?  Vietnam?  No, so 2013, Bangladesh?  Getting too pricey.  Nope, going for upper Myanmar…that maybe Burma to you, but to us, it’s Mynamar.

Anyway, back when I was an eager apprentice, I tried to help Angus doing some shipping.  This pic is from June of 2010, exactly 5 years ago.  Looks like I wanted to remove a product for further inspection.  And looks like my brother, Angus, the CEO at that time, was not approving.  In fact, I know he didn’t approve of me at all.  It took him to about 2013, maybe even 2014, to fully accept me. 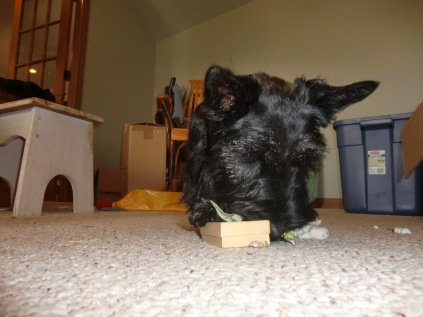 But it all goes into the learning process.  In order to know the product, it really helps to dissect the product.  Learning by experimentation.  This pic was taken shortly before the other one.

While we are back in June of 2010, (which is just a few short weeks after my recruitment into the company back on Mother’s day 2010), I found this picture from the dog park.  Mixing it up with the locals, that’s me!  It’s a shame I quit going, but me and Angus got attacked by pitbulls, I believe about a year later.  I rolled over, which is what I always did when I was ready to take a break, but instead of like every other dog breed on the planet, the pit bulls took me rolling over as a sign to attack more.  Meanwhile, Angus was giving a pitbull about 50 feet away a battle of a lifetime.  Catman and Mama yelled at the Pitbulls owner, but he just kinda stood there with a stoopid expression on his face (the pitbull owner, not Catman – though he sometimes has the same look, but I digress).  Anyway, after that altercation, we just didn’t go that much anymore.  Shame, really

One more picture…that’s me and Angus, and Mama’s Goddaughter, Sarah, on the way to the dogpark.

Hope you enjoyed, or at least tolerated, this CEO’s brief voyage down a Sunday night memory lane.

18 thoughts on “The CEO and his Apprentice”