Going through my 2015 pictures – y’know, sorting, deleting, and renaming – and thought I would try to condense 2015 into 15 pictures.  Pictures that help highlight the year 2015 here at Angus Fala Worldwide Enterprises.

THANKS AINSLEY, GLAD TO BE WITH YOU ALL TODAY. AND

First up, coming in at number 15, a picture that was a hit back in September – Mr. Bear decides to get all political on us, and Ainsley can’t believe it…here’s #15! 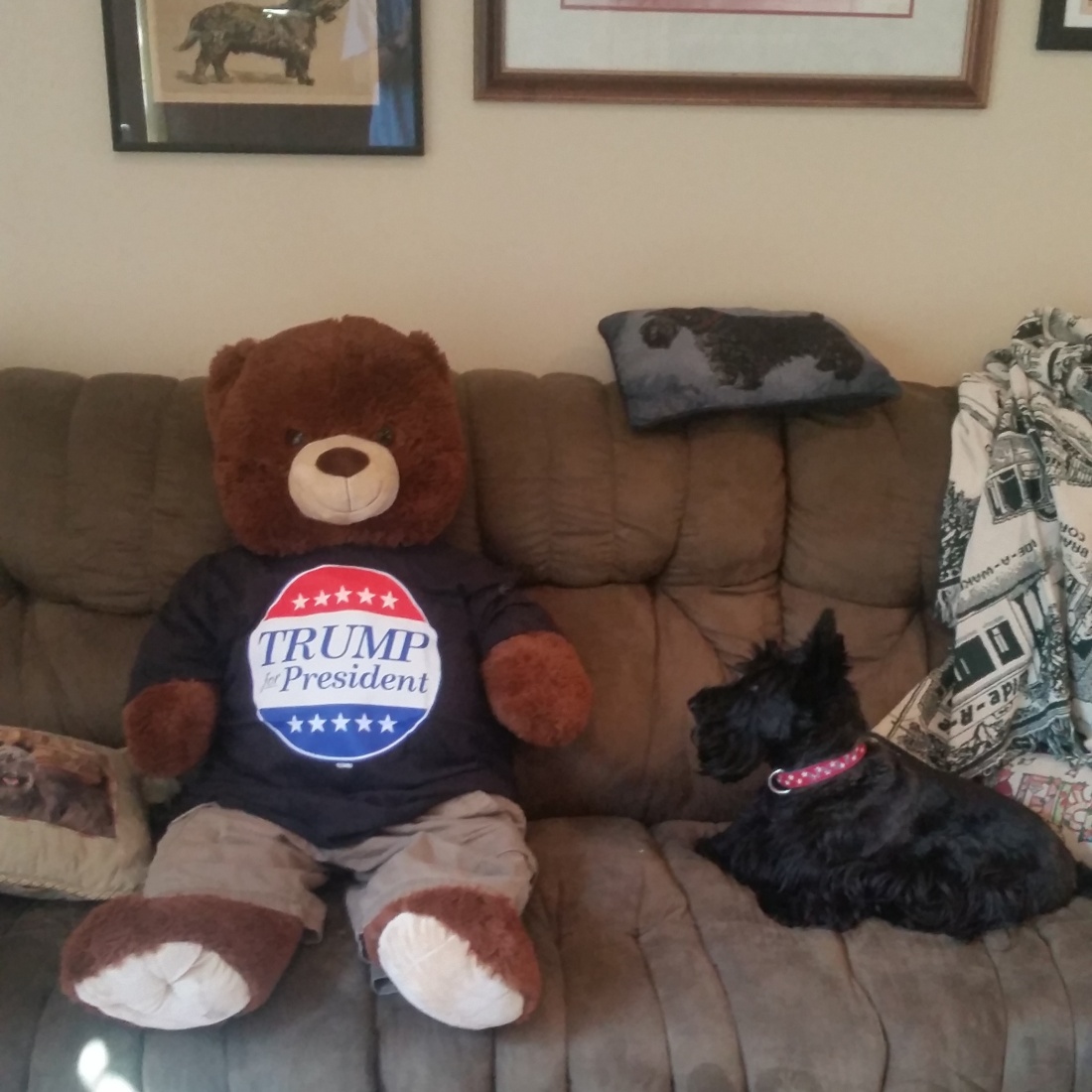 And we’re back, and counting em down to number 1!

There was a lot of traveling and a lot of guests at the Ainsley Institute.  Back in August, Ainsley, Catman, Mr. Bear and Mama went to beautiful TOLEDO, OHIO, home of Corporal Klinger of MASH, and while they didn’t have time to partake in any of the cultural opportunities of Toledo, they did even better – by visiting SADIEPALOOZA!  It was loads of fun, one of the Scotties kept escaping, there was the requisite Scottie fight, and the reclusive and enigmatic Sadie came down even to greet her guests, and then retreated to her bedroom, and came down again at the end for the mandatory group picture.  So let’s take a look at #14 in our countdown – the Group picture from SADIEPALOOZA!

And we’re back, and counting them down.  I’m Kasey Kaseeem, straight from  the Rainbow Bridge.

And we’re back on the countdown of Ainsley’s favorite 15 pictures in 2015.  I’m Kasey Kaseeem.

Let’s stay in February – and another picture you haven’t seen before.  It is the morning Angus goes to the Rainbow Bridge.  Angus and his devil ball troops, coming in at #12… 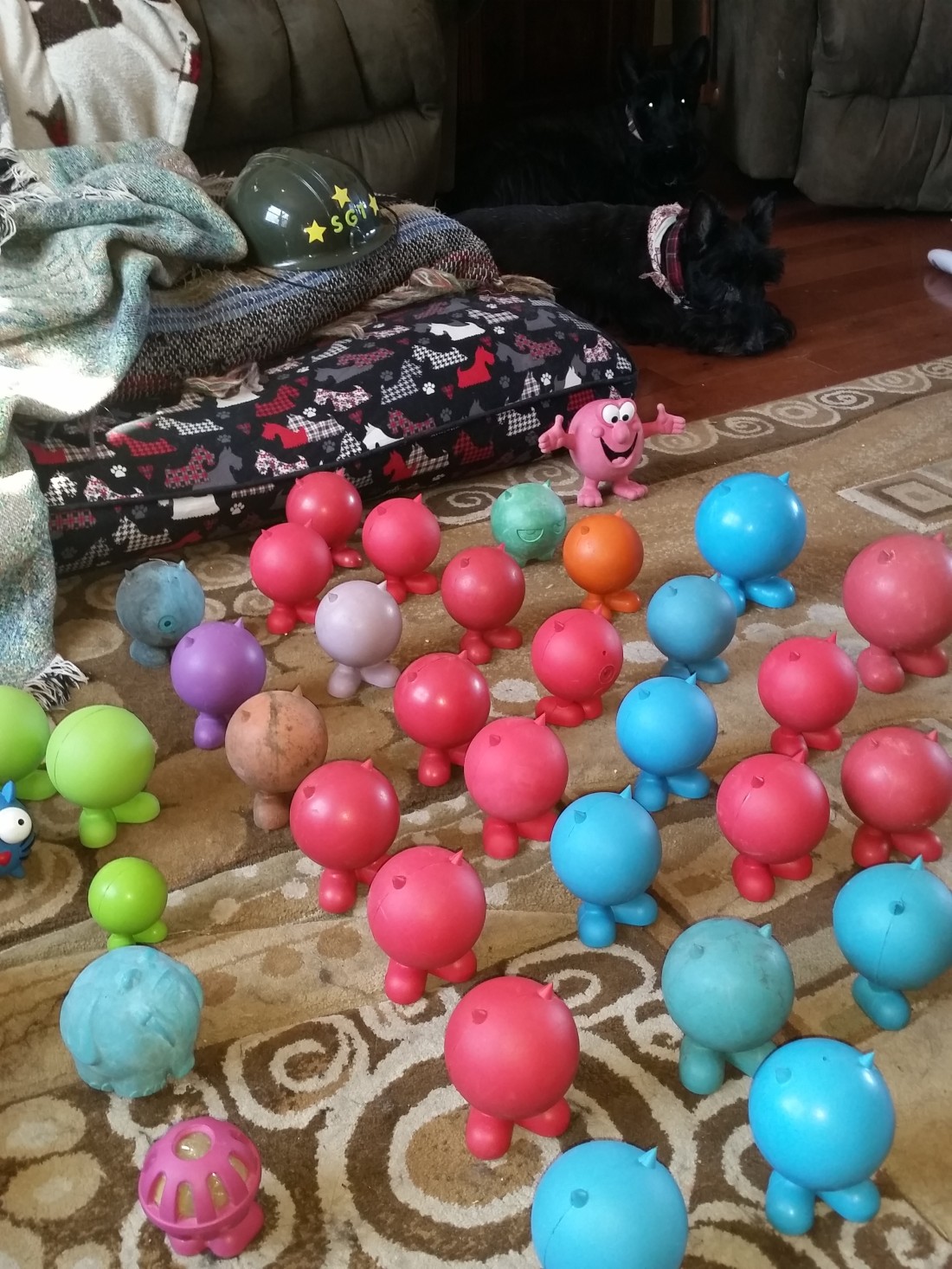 We’re back and let’s go to our #11 photo in our countdown.

Let’s go on another trip – this time in September, and let’s see if it can play in Peoria!

Ainsley visited the home of the Reeds, home of 2 gorgeous standard poodles.  And also met a visiting Commandor, a member of the Scottie Old Breed, Rascal B. Dascal!  Ainsley tells me that Rascal is renowned for killing a copperhead poisonous snake.  So coming in at #11, Commander Rascal B. Dascal, Daisy the Pitbull, the Reed’s 2 Standard Poodles, and Ainsley (and assorted staff)

#10, and making an appearance also from the Rainbow Bridge is Cary Grant.  Cary died after living at the Institute only 2 weeks, in a loss that still tears at Ainsley and the staff today.  Cute as a button, and smart too…Ainsley’s loss is the Rainbow Bridge’s gain, let me tell ya what.

A day before Cary was diagnosed with a terminal heart condition, Cary and Ainsley and Mr. Bear visited the Aunt Judy Inn in Late November for one of Aunt Judy’s famous photo opps.

So from November, it’s the Christmas Picture, and one you haven’t seen before, where Cary is wondering just why the heck Mr. Bear is here…#10 in our countdown….

We’re counting them down as we’re looking to the stars, on the Ainsley Institute Top 15 Pictures of 2015.  I’m Kasey Kaseem.

Ainsley, Catman, and Mama left Mr. Bear guarding Angus Manor (now renamed the Ainsley Institute) for a trip to the Windy City – and paid a visit to Princess Peyton, Handsome Jack, Judy and their respective staffs.  #9 on our countdown is Mama and Ainsley, on a chilly March Saturday afternoon, on the shores of Lake Michigan… 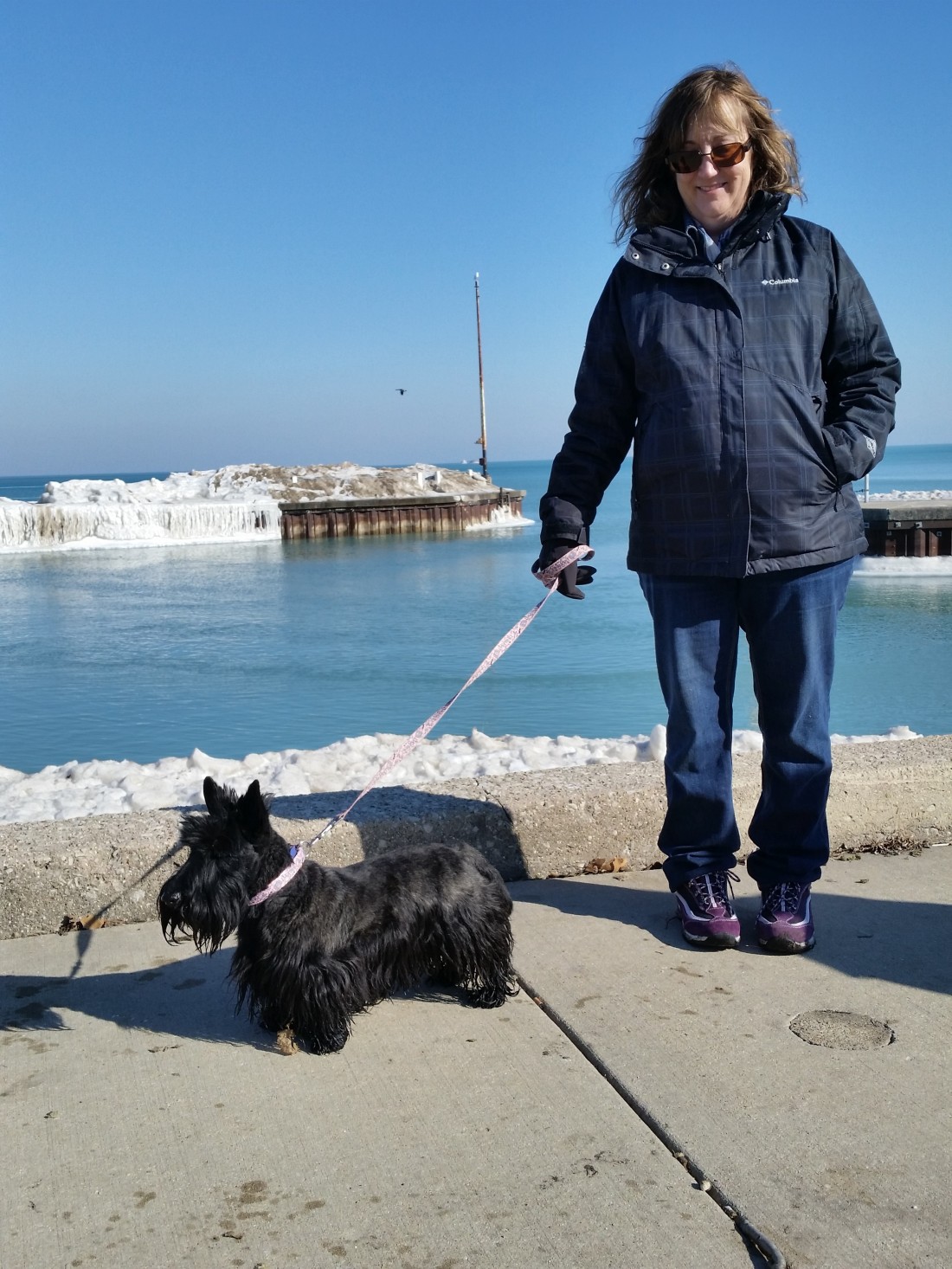 Let’s move on through the countdown.  A lot of distinguished guests at Ainsley Institute this year.  First to visit was Beril, all the way from down under.  So #8 on our countdown is Beril, Mama, Aunt Judy, and Ainsley in the reception hall of the Ainsley Institute…

And keeping to our theme of down under guests, just 2 days later, the So’s from Perth Australia visited.  And to help Ainsley welcome them, she enlisted the help of Aunt Judy and Uncle Bob, and invited her dear friends Princess Peyton, Handsome Jack, Bee Bee, and Bella.  So here’s #7 on our countdown…and look for Bella and Bee Bee’s Hooman photobombing the picture at the top left of the picture by waving Ainsley’s paw……. 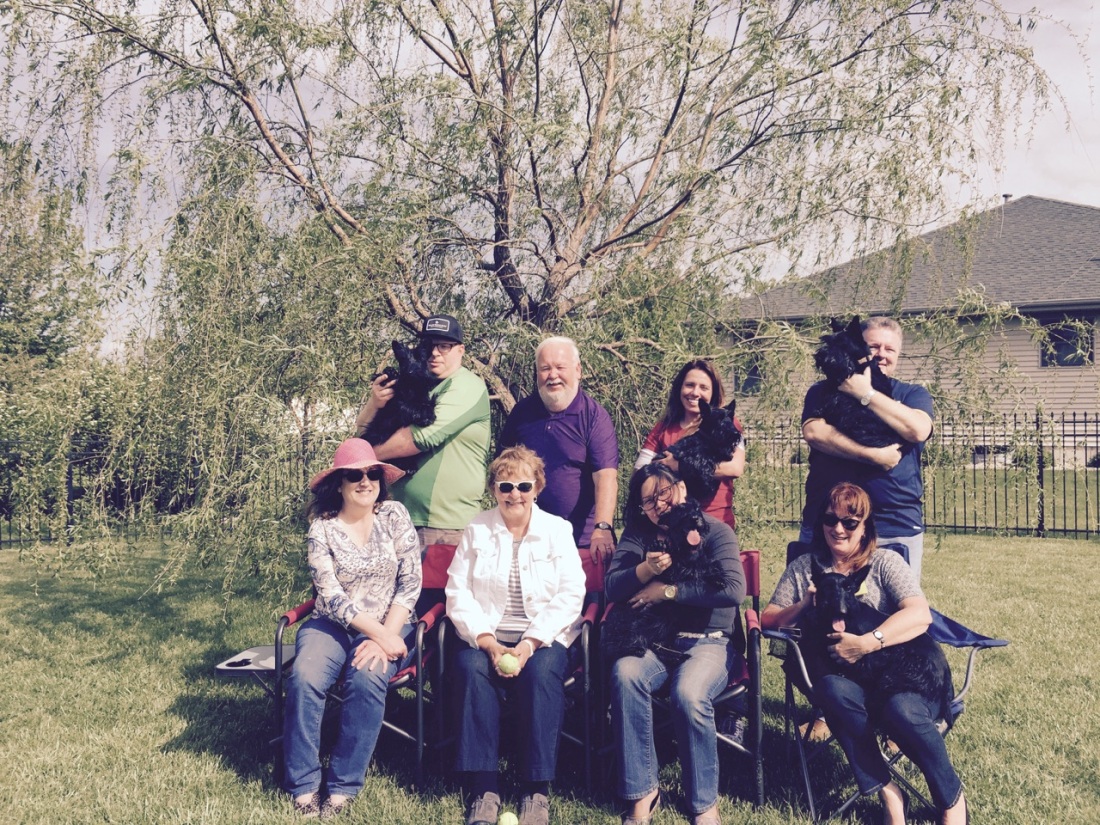 We’re more than half way in our countdown – let’s go to #6.  I’m your special guest host, straight from the Rainbow Bridge, I’m Kasey Kaseeem.

Now, let’s keep with our group pic themes.  Just 2 days after this last picture, Ainsley, inspired by all her guests, killed her first baby bunny.  A very eventful day – as Ainsley never killed anything before.  And then 2 days later, she killed again.  Then, 2 days later, ANOTHER KILL.  And later that day, Ainsley hosted Indy and Lucy from Oklahoma, and also Princess Peyton and Handsome Jack surprised everyone by coming too!  So here is #6 in our countdown…from late May, Ainsley, Indy, Lucy, Handsome Jack and Princess Peyton – and that Mr. Bear – and assorted staff…

Of the literally thousands of pictures Ainsley’s staff took this year, we are now in the top 5.

Let’s go back to November…the day that Cary Grant came home.  Mama  sure looks happy here.  A happiness that was short lived, unfortunately… 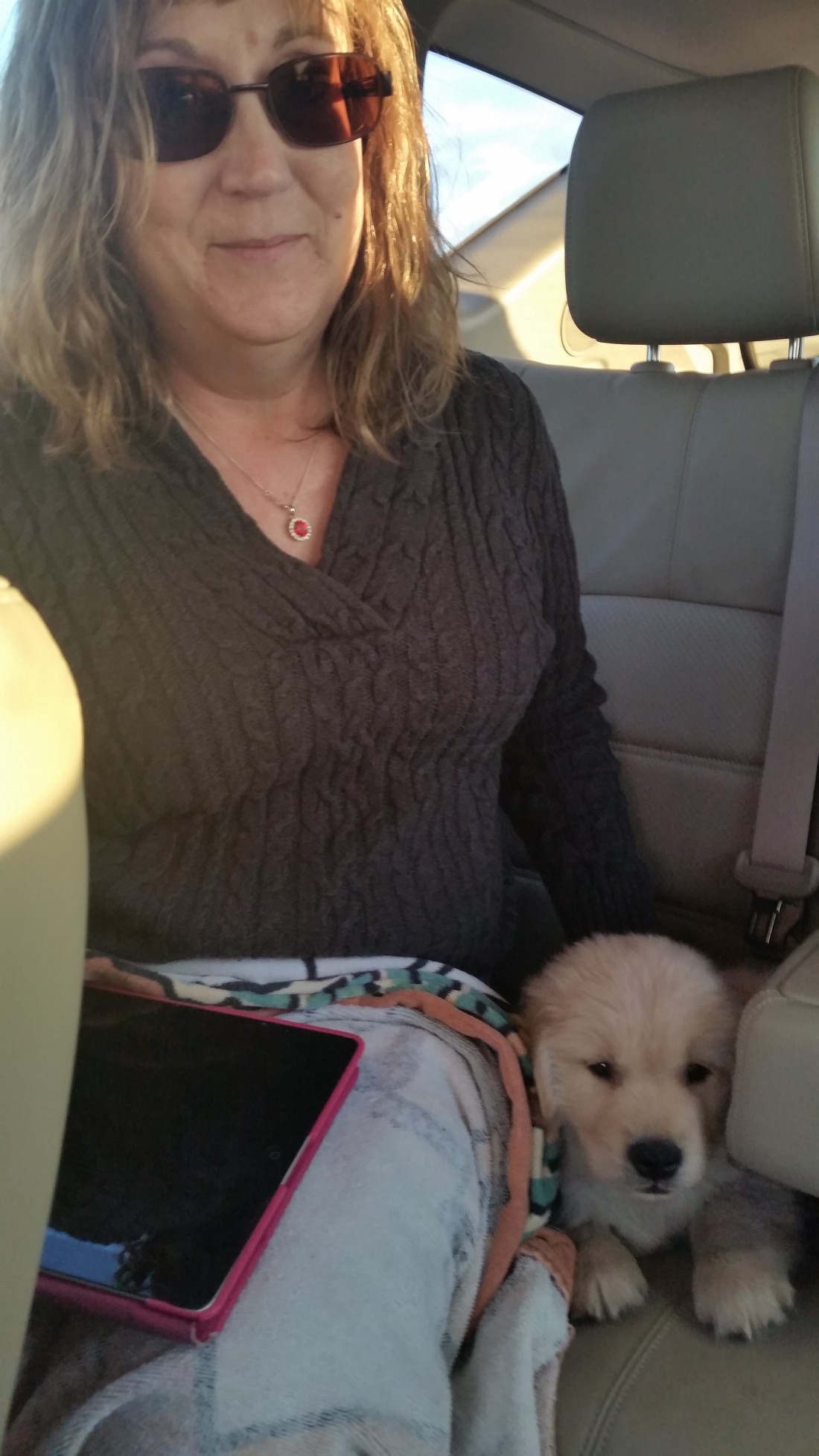 #4 on our countdown we are going to February….just 3 days before Angus passed to the Rainbow Bridge.  Here is Angus on a cold February morning.

We’re counting them down, here on the Ainsley McKenna countdown.

Let’s now go to the oldest picture on our countdown – Angus enjoyed a good game, and Scottie Scrabble was one of his favorites.  Let’s go back to January of 2015 – with Angus, Ainsley and that darn Mr. Bear, playing scrabble.  And the words are all words frequently used around Angus Manor (now Ainsley Institute) –

Here’s #3 in our countdown…

Alright we are down to #2.  I’m Kasey Kasseeem.

And just last night I had the opportunity to eat, once again, at the Angus Fala Boiled Egg and Ice Cream Parlor, at the corner of Stoic and Stubborn in the heart of Terrier town…and who was my waiter, but the one and only Cary Grant….not the actor, but the Golden!  And Cary is the subject of our #2 picture…the moment that Ainsley and Cary met for the very first time back on November 12, 2015.  Here’s First Meeting with Ainsley and Cary, taken at Aunt Judy’s! 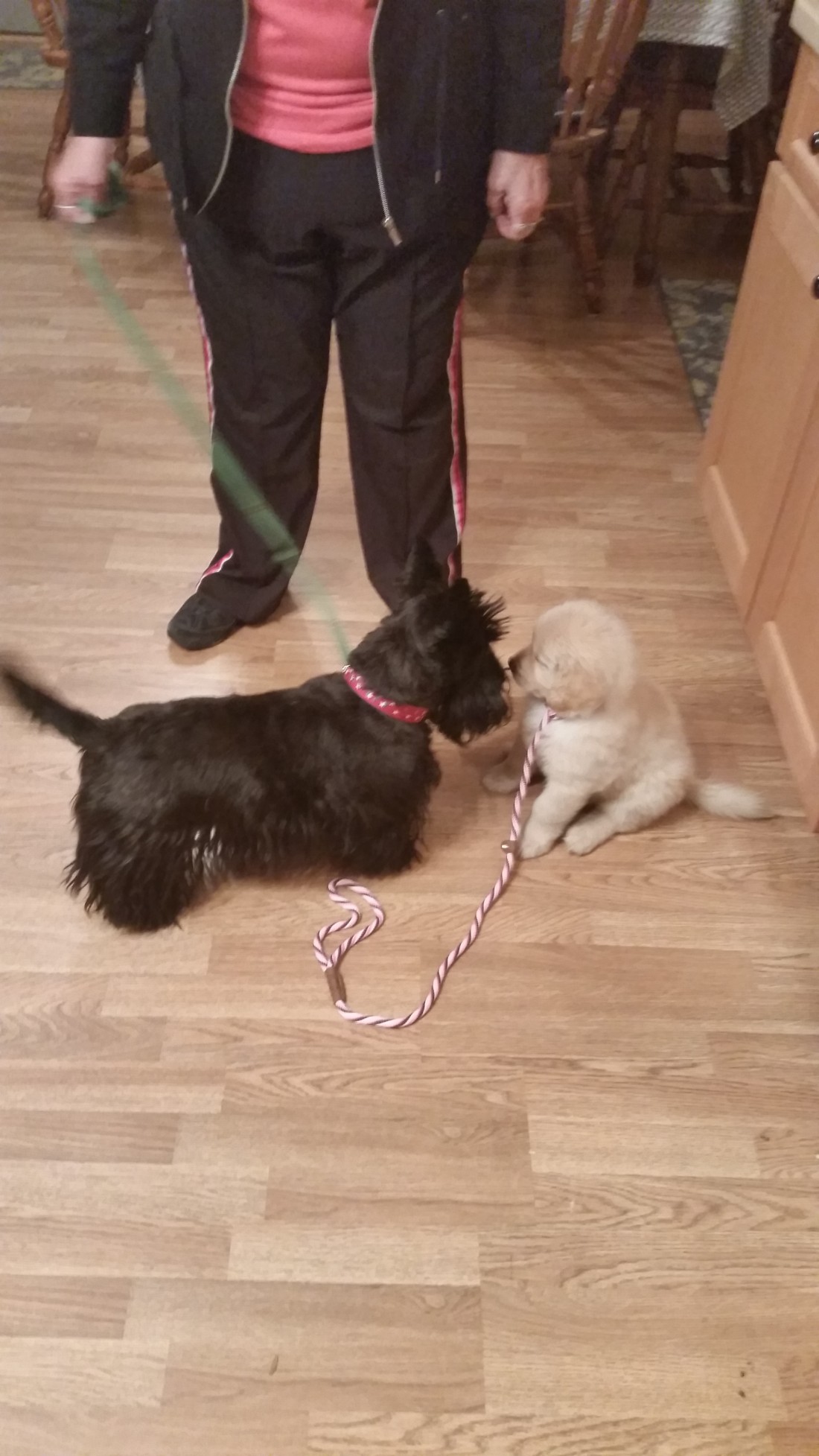 We’re counting them down, so you don’t have to use math, here on the Ainsley Institute Top 15 of 2015.  And our #1 picture of the year was taken on one of the most pivotal and incredibly sad days ever at Angus Fala Worldwide Enterprises.  Our #1 picture is from February 28, 2015.

This picture too was taken at the Aunt Judy Inn, just like the #2 picture.

I gotta say, first though, it has been a pleasure presenting these pictures to you.  And I want to thank first off, Ainsley McKenna for giving me this opportunity.  And I want to thank those who helped make these pictures possible – Catman, Mama, Uncle Bob, Aunt Judy, Handsome Jack, Princess Peyton, the So’s, Beril, Indy and Lucy, Judy, The Reeds, Daisy, Commodore Rascal B. Dascal….and last and least, Mr. Bear – who I hardly know and don’t really like!  And let me say that no cats were used in taken these pictures.   Let’s go back to the countdown.

OUR NUMBER ONE PICTURE OF THE YEAR IS …

That’s it for the countdown….and Angus, reserve me a table in the back please, I’ll be eating lots of eggs and Ice Cream Tonight!  Thanks again for viewing our countdown.  So until we meet again, keep your paws on the ground and keep reaching for the stars.  But don’t reach too high, or your grubby little hands might just get high enough to mark up Angus’s Boiled Egg and Ice Cream Parlor’s exterior – that stucco ain’t easy to clean you know!  So til we meet again, I’m Kasey Kaseeem.

Leave a Reply to Leah and Mac Cancel reply