I have a small parcel of land that is mine and mine alone.  It is probably about 7000 square feet, and enclosed in a fence.

This land is not the bank’s, it’s not Barack Obama’s, not Donald Trump’s, not Vladimir Putin’s, not ISIS’s, not yours, not your dog’s – it’s mine.  It’s called the backyard.

As a puppy, while brother Angus would play in there and mug for the camera, I took it upon myself to guard and protect it.

I got a million photos like this.  Angus in the foreground, barking or playing or having a ball in his mouth, and in the background, there will be me, on the fence line.  In good weather and in bad.

So now that I have set the background, let me tell you a little story about yesterday.

Mama let me outside, about oh nine hundred, for the 2nd time yesterday, and she settled down in her recliner with a diet coke, and then heard me barking (aka acoustic salvo launching).

In itself, my firing acoustic salvos at the yard is not unusual.  It’s what I do.  I’m protective about 2 things in this world.  First is the car, when I am in it alone.  I’m gonna defend it.  If staff is in the car, not so much.  They can defend it for themselves.  The second thing is my backyard.  And I will defend it if staff it out there or not.  I’m always watching – alert.  Looking for threats to the fenceline. 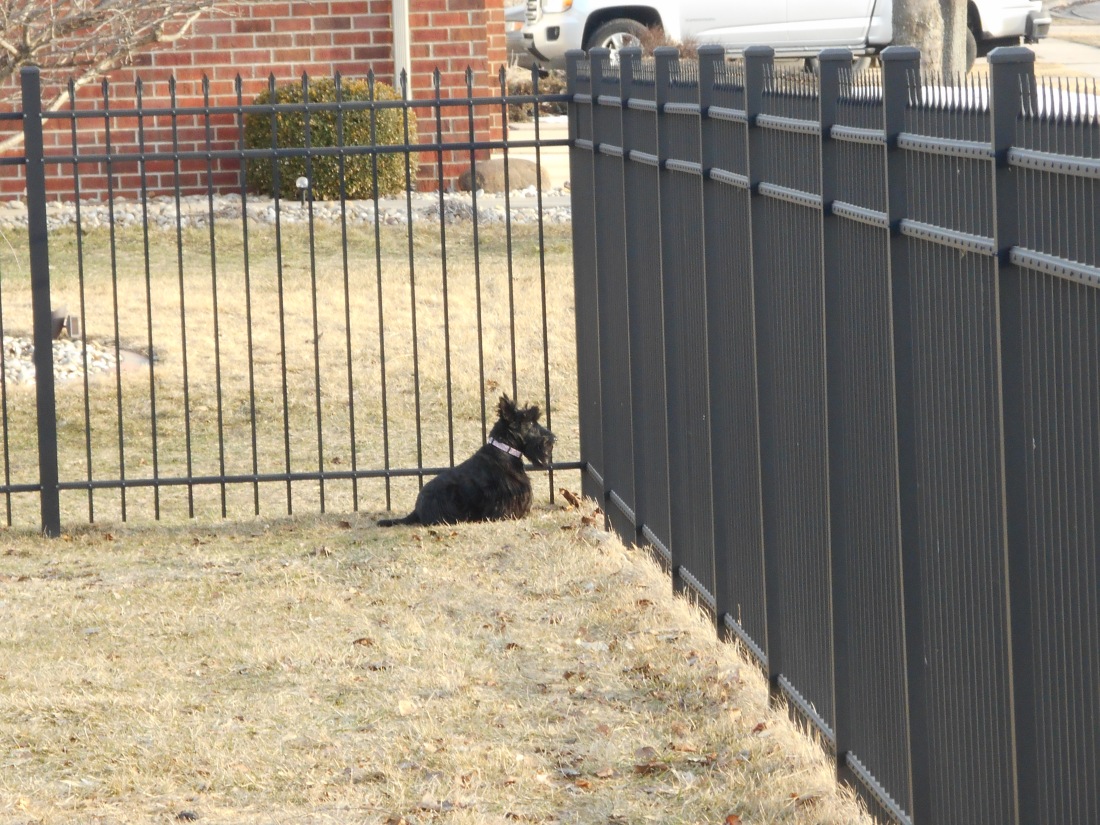 Anyway, where was I in my story?  Oh yes, barking.  So Mama thought, “Do I need to get up?”  Not unless Ainsley doesn’t stop soon.  Then she heard a terrible ruckus.  Acoustic Salvos being fired at a rapid more frantic rate, and growling and all sorts of commotion.  So this time, she decides, i gotta get up now and see what is going on.

Now, questions for the glaring lady:

First, why did you walk to the fenceline?  It’s a good 20-30 feet from the sidewalk to my fence.  Nobody gets to visit unless you are on the guest list.  And let me see – I don’t see don’t see your name, and I don’t see Dustmop’s name either.  I don’t even see Paul McCartney’s name (which is the only thing I have in common with Tyga, I suppose)  In fact, yesterday’s invited guest list was empty.  Nobody was on it.  So why did you think it was a wonderful idea to walk up to my fence?

Second, in what point during my acoustic salvo firing did you think I was saying, “hey, I like you, come up and see me?”  I mean, a dog with a mouth like a German Shepherd and huge outsized teeth doesn’t seem that friendly, I wouldn’t think.  And I am a terrier, right?  I look like a Scottie, the AKC says I am a Scottie. So whadaya know, I am a Scottish Terrier.  Not a Golden…not a Lhasa Apso, not a stoopid friendly beagle…I am a Terrier.  Do I look approachable to you???  Maybe one of my acoustic salvos misfired, and instead of saying what I intended for it to convey, which was “Get the Hell Away from my Yard,” perhaps it said “Hey, come on down.”  If it did say that, please let me know.  I will need to call Scottish Terrier Acoustic Salvo Technical Support and ask them what the problem is with my acoustic salvos.

Third question – why you glaring at me?  Why don’t you take a little mirror out of your purse, and glare at the reflection.  Cause the only one here doing what they are NOT supposed to be doing was you.  You Maroon!