My brother, the late great Angus Fala, loved his headwear.  Aunt Judy first introduced Angus to headwear, and he took to it quite eagerly.  As you see below here in the following slide show with just 3 of the many various headwears that Angus enjoyed.

In late 2014, Aunt Judy gave Angus a helmet, with his rank emblazoned on the front – and Angus called the helmet his Polymer Based Attack Repellent Cranium Cover, or PBARCC for short (that would be pronounced “Pee-Bark”).  Perhaps one of his favorite pictures was this one, taken shortly before Angus passed on. 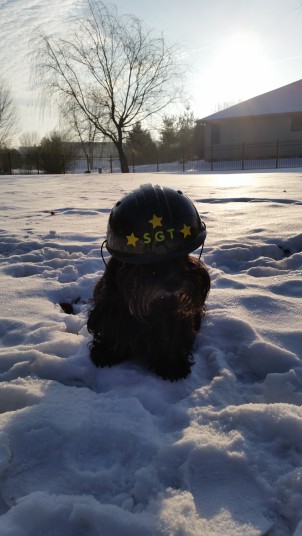 After Angus passed on to the Rainbow Bridge, the gauntlet for wearing headwear passed to me.  At first I was hesitant, but then Angus spoke to me in a dream, and told me it was my job now, the torch had been passed.  Overnight I became an excellent headwear wearer.  I got so good at it that when I travel, people take pictures of me.

I have become an advocate of headwear.  Mr.Bear has become pretty good at it…

I even convinced the Commander, Rascal B. Dascal, a copperhead killing old guard Scottie, about the joys of headwearing, as Commander Dascal demonstrates here….

One big problem though.  This new guy at the house, George Kerby…I’m not so sure about this boy.  We introduced him to the joys of headwear last night…I don’t think he gets it, do you?

Hmmm.  A work in progress, to be sure.

Blog at ya later.