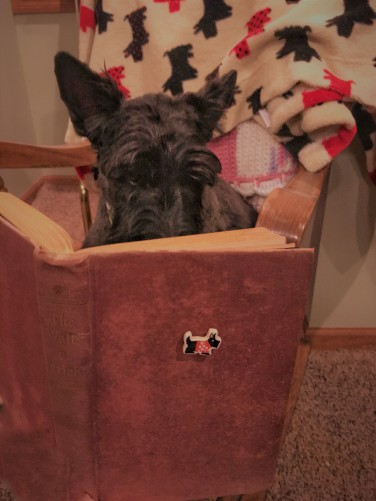 Eddie  was looking over the darkening North Sea.  Behind him, the warm candle light glow of his stone cottage near Tarbet Ness beckoned, but Eddie, accompanied by his dog Belle, was standing still on the cliff, watching the sea hurtle into the cliffs below, powered by a suddenly strong easterly wind.  Until recently, no one in their right mind would live in such a secluded spot.  The countryside was far too dangerous.  But under the enlightened rule of the Scottie Kings, banditry was non-existent allowing residents to spread out among the kingdom.  Still, though, Eddie periodically visited the capitol city, about 20 miles away, to trade crops and livestock for goods that his family needed.

“I guess we better head in for supper, Belle, Eddie said to his golden colored dog.” Eddie said, his breath rising a wispy white in the cool dark Scottish air.

“We’ll hunt more ducks tomorrow,” Eddie said, referring to his and Belle’s nemesis, the waterfowls that were the scourge of his small subsistance farm.

As Eddie and his dog Belle entered the small cottage, behind him in the cold dark ocean a solitary light flickered in the waves,  far away on the horizon.   The light quickly became steady, and if Eddie had been still looking, he would have noticed the light was soon accompanied by first a few, then dozens, of other lights,out on the dark sea.

Out on the water, under that first light, sailed a ship.  A flagship of a vast fleet.  And on that flagship stood the Siberian Lord Vlad the Envious.  Lord Vlad was genuine Grade A 100% Evil.  Lord Vlad stood shirtless, wearing black pants embroidered with jewels from plunder.  The evil Lord was accompanied by 2 pure massive white Siberian Tigers.  Also on the ship were about a hundred officers, soldiers, and crew, and on the rowing deck and hold of the ship were 89 prisoners of war, slaves really, rowing away for 3 straight months.  Lord Vlad started with 323 prisoners on his flagship when he started.  The seventy some odd other ships were similarly equipped with prisoners, but they were also equipped with a large number of the worst, most wicket bunch of bloodthirsty mercenary soldiers known to this hemisphere.  And worse yet, the ships held thousands of the meanest canines on the planet.  Some dogs are good and occasionally, by mistake, don’t always good things.  Other dogs are neither bad nor good but sometimes do bad things.  And some dogs are plain bad, and do evil things.  Those dogs are called Siberian Huskies.  And that’s what Lord Vlad had – thousands of the evil eyed blue eyed beasts, waiting to do their evil master’s bidding.

“Your Lordship, Scotland approaches.  Where do we land our ships, sir?” said Lord Vlad’s second in command, Admiral Akira.

“It’s all been prearranged, Admiral” said Lord Vlad, stroking the head of his favorite tiger, Shakira.  “Look for the light that flashes three times, two quick, and one long.  That’s where we come ashore.  You see, we have friends among our enemies in Scotland.  With their help, by this time tomorrow, we will be feasting in King Angus’s Palace Ballroom while sifting though the kingdom’s treasure.”  Then Lord Vlad tipped his head back in a most evil, deep, ominous laugh.