Ainsley and I are Wisconsin Scotties.  Bred & Born in Janesville, Wisconsin behind the cheddar curtain.

Our hooman staff, though, are Southerners.  Well, Mama was born in Indiana, but raised in Georgia, and Catman born and raised in Georgia.    But they’ve lived up here with us Yankees for the past 25 years.

They don’t have many Southern characteristics that they have retained – except maybe their accents.  But one Southern dish they will eat is grits.  And quite frankly, though I’m a Yankee Scottie, I like the grits myself too.  I never do the ol’ sniff and sneer at Mama’s grits!

Mama doesn’t try to make them from scratch.  My late great hooman grandmama did – and boy, were they good!  Mama makes the instant kind, and they are pretty good.  And let me give you guys a cooking tip.  Go easy on the water.  You don’t need nearly as much water in the bowl as they say.  Last  thing you want is watery grits.  And you don’t need anything in there – except maybe butter.  Butter goes together with grits like stubbornness goes with a Scottie.

So grits are the one southern dish that me and Ainsley thoroughly enjoy.  Catman’s boiled peanuts though?  Bleech!

I woke up the hoomans at 7:15 am…barking.  Apparently, they foolishly and irresponsibly thought they could sleep in because it is the weekend.  Nope.  Not gonna happen.  I have things to do, no rest for the weary.

Hooman tried to give me some meds, and as per usual, put it in Carl Buddig Turkey.  (I used to get them in Greenies Pill Pockets, but I started rejecting those back in 2012).  They didn’t adequately wrap my pills, so the first turkey slice I got the turkey, but the pills fell out.  Here is the picture right after it happened.

Then, after I got my pills, I rested a bit, then time for my midday patrol.  It was about 10 degrees, but not much wind.  I went out wearing Ainsley’s Dress Uniform, cause my dress uniform from Scottie Logistics, Southern Command (Australia) doesn’t fit me anymore, since I lost so much weight this year.  And Ainsley prefers to go au naturel…cause she is a bit of a non-conformist hippie, I believe.

Well, we were especially on the lookout today for the French Female Terrorist, but I can say with certainty she is not in the neighborhood.  Apparently, no Huskies, Bicyclists, Joggers, Vagrants, Thieves, or Airedales were in the ‘hood either today.  We saw no one.  So no acoustic salvos had to be fired.  We did take one casualty though.  Ainsley started limping half way through the patrol, whining she had snow stuck in her paw.  Well, a few slaps by me to her head, and some berating she is a yellow belly coward, and we got her on the move again.  Morale is my middle name, and the beatings will continue until morale improves.  So here is the combat photograph as Ainsley and I enter the gate to enter the Angus Manor Compound.

Well, we then earned a well deserved rest.  As you see here, I am relaxing on my pillows, while the stoopid cats are lounging around in Mama’s lap.  If you notice the white dots on my beard and snout it is the snow melting.  After such a grueling patrol, we rested all day.

Well, a pretty uneventful Saturday.  But as we say in the Scottie army, any Saturday you can walk away from is a good one.  See you Sunday.

A cold snowy night at Angus Manor tonight.  They say it’s gonna be quite the snow storm and coupled with some frigid weather – negative 15 degrees Fahrenheit by Thursday morning.

Private Ainsley and yours truly just returned safely from my nightly patrol.  Here you see me, wearing my high tech camouflage winter wear.  Though I gotta wonder what the boys in Scottie Logistics are thinking, going with the orange and blue camo pattern.  Don’t know what color the snow is over at the Homeland of Scotland, but here in the frontiers of Illinois, it comes in one color – white.

Today, I decided to take a page out of the TV Show “Undercover Boss.”  I put on a disguise, and headed in to Angus Fala Worldwide Enterprises to see how my employees behave when I am not around.

But I had a snag.  I think the employees are on to me.  They handed me a treat when I came around their desk, just like they normally do.  I don’t understand.  Just like the boss on the TV show, I wore a disguise.  I wore a new snazzy red plaid collar, instead of my normal old snazzy blue plaid collar.  Don’t understand this at all.  How did they know?  I bet that Ainsley tipped them off. 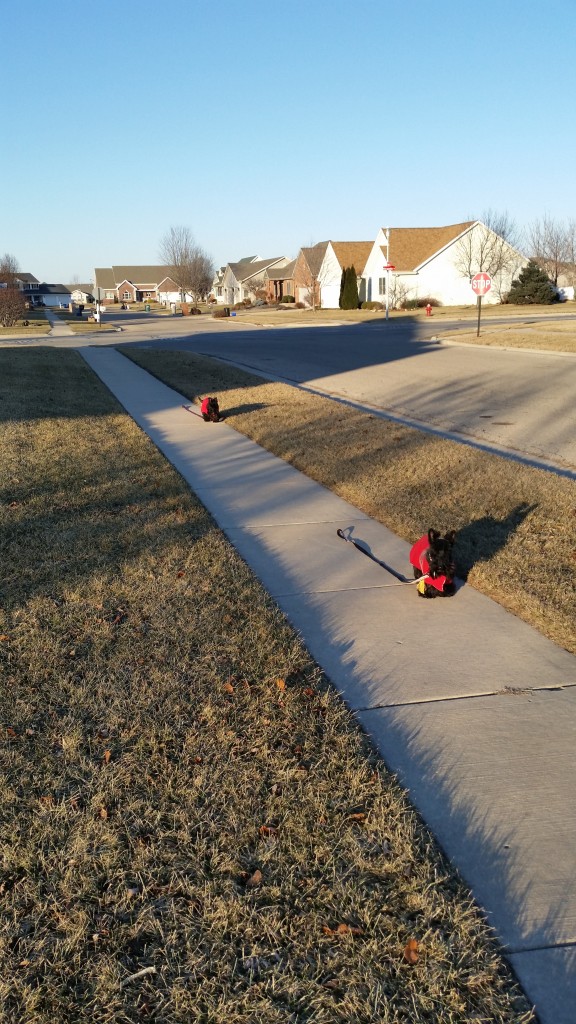 Description: Went on a patrol this morning with Private Ainsley McKenna.  Seen here, you can tell we went out equipped in our Winter Gear, as the actual temperature was 1 degree Fahrenheit (-17 degrees Celsius), with a windchill approaching negative 10.  Ainsley was wearing her full dress Battle Scottie Uniform, as supplied by Scottie Logistics – Southern Division (B. Murray- Australia).  I have lost far much to weight to wear my dress uniform from Ms. Murray, so I had to wear just a conventional sweater.  Even then, it just hanged off me. Normally, as you know, I mock Scotties that wear their sweaters when it is like 40 degrees, but once we approach zero, we appreciate the warmer gear.

Enemy Encounters: None.  Very quiet.  We did get barked at by the Yorkies from their position in the front window of the next door house, but they are not hostile.  Just stoopid.

Unless an emergency arises, my next communication will be in 2015.

In the Book Of Scotties, it is written that Scotties view cats as Vermin.  And a Scottish Terrier is supposed to eliminate his planet of all Vermin.  That is the mission we have been tasked with and we take it seriously.  All Scotties, even my dwarf Scottie sister Ainsley, know this.

Unfortunately, no one told my hooman staff.

I have lived with cats since day one here at Angus Manor.  When I arrived on the scene on Father’s Day, 2001, there were 3 here – a 17 year old Black Cat named Prissy, an 8 year old Siamese named Dinah, and a long haired orange boy named Pickles. I learned quickly they all have their claws, and if I chase them, I get reprimanded by the staff.  Well, the three original cats have all moved on to the cat equivalent of the rainbow bridge, 3 other cats have come and gone from the manor, and now we only have the gray haired twins, Herman and Lily.  As Cats go, they seem ok.  Never give me trouble, and never would dare to lay a paw on me in anger.  In fact, sometimes they snuggle up to me when I am sleeping, and I don’t pay them any attention.  They aren’t family, but I know to leave them alone, so I pretty much ignore them. 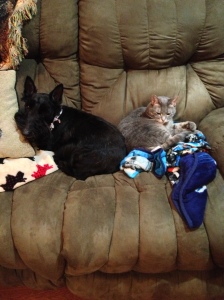 And here’s what sometimes makes me appreciate cats.  Occasionally, hoomans will have a bag of food on the counter, and since cats have counter privileges here and the skills to jump up to high spaces, they will sometimes push the bag of food down to Scottie level.  Sweet!  And sometimes, the hoomans forget to put the catfood out of Scottie paw reach, and there is nothing more delicious than cat food, except maybe the cat litter poo hors d’oeuvres.   Here I am partaking in some delicious forbidden cat food.

So I am open minded enough to appreciate the feline species.  As you see here…

However, for the past week, Hooman sister has been visiting us.  And while her presence is most welcome, she brought her two evil cats – Diablo Uno and Diablo Dos.  And they are pure unmitigated undiluted evil.  They get into everything, always thinking of ways to cause trouble, and aren’t above trying to hiss at me and  slap me with their claws.

So I have been reading a volume out of the Non-Fiction section of the Angus Manor Library – and I am quite concerned.  Diablo Uno and Dos are supposed to be leaving tomorrow.  Til then, I think I will be sleeping with one eye open. 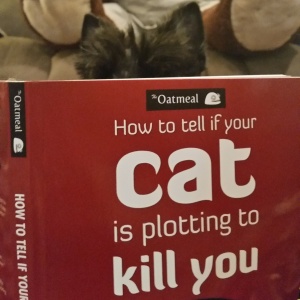 Talk to you next week – I hope!

Merry Christmas from me, the CEO, at Angus Fala Worldwide Enterprises!

Today Ms. Mary in the front office distributed the performance bonuses (aka treats) to me, Ainsley, and Mr. Bear.  (See Pic) 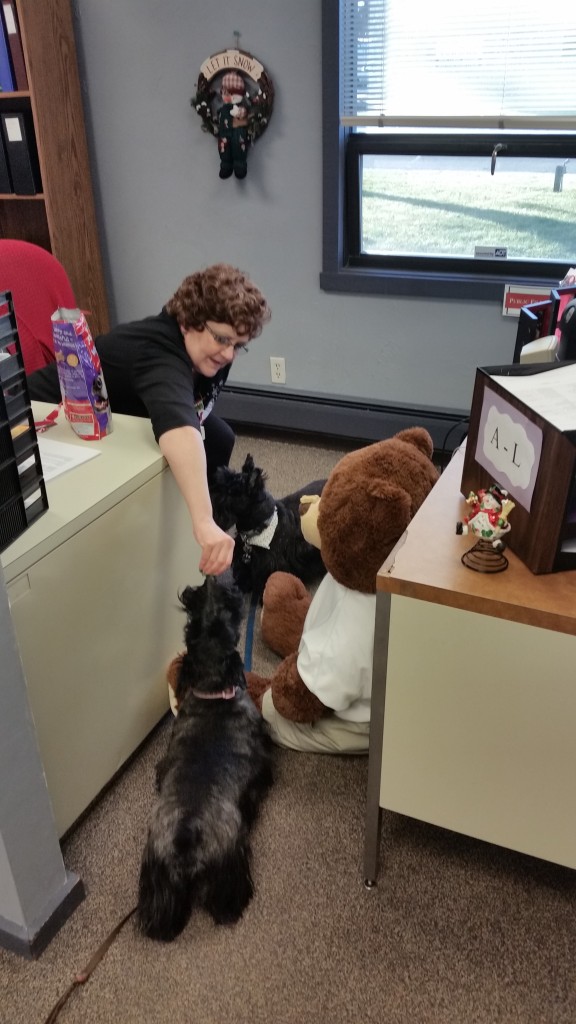 If you notice closely, you can see that Mr. Bear shocked and awed us with his skills.  He can balance a treat on his nose FOR HOURS, and never seems tempted to eat it.  Weird huh?  I bet he is sorry his mouth is sewed shut now!

Now, back to work! 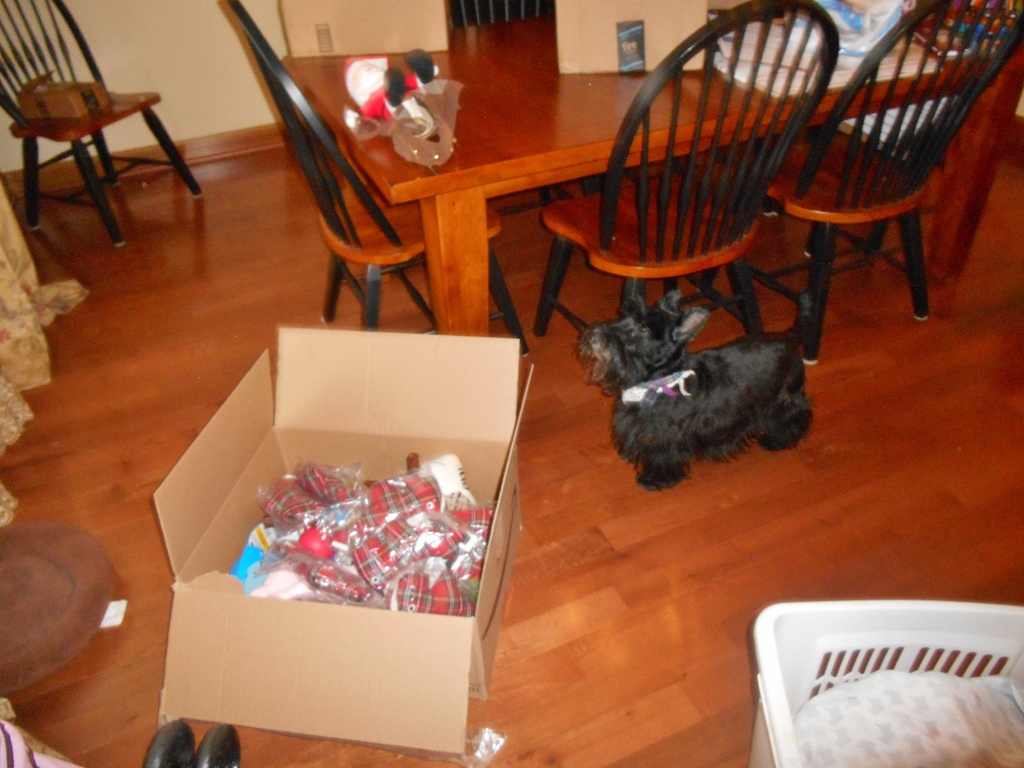 What have we here?  Looks like the Shipping Department has left a box of product open and unattended on the facility floor.

Just what are the boys in shipping sending out today…hmmmm.. 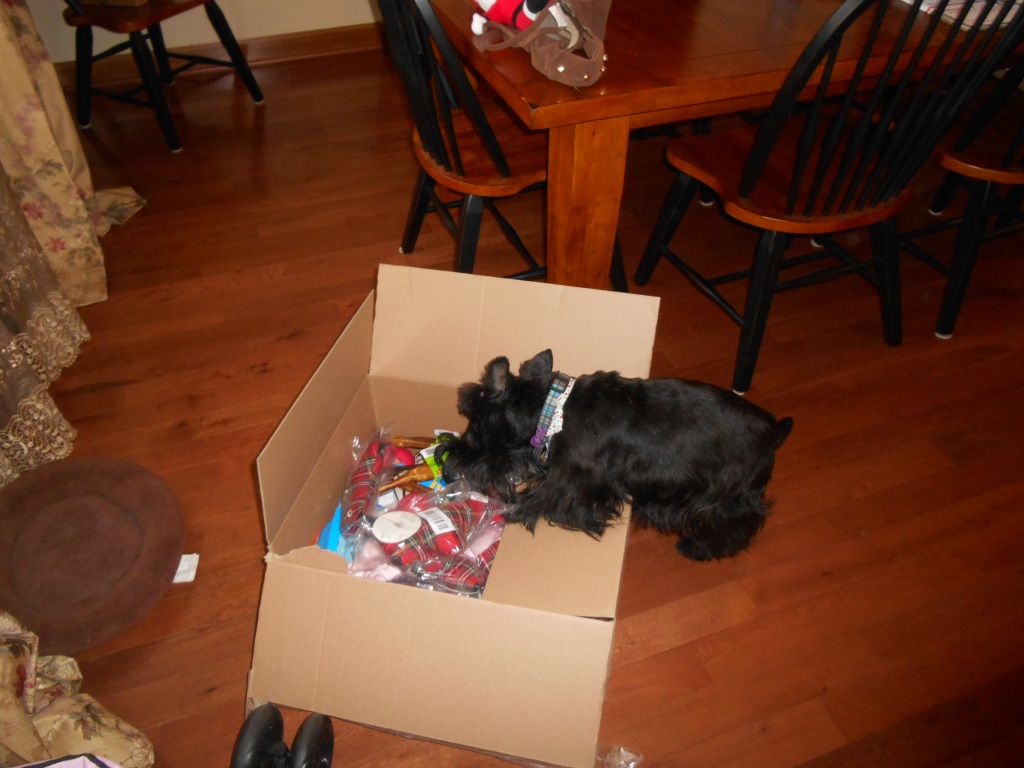 Looks like we have Scottie Toys, Devil Balls, some Scottie Magnets, and oh – what’s this – some Bully Sticks.

Yep, the inspection by your CEO is now over.  Everything seems in order.

But I’m gonna take off a Bully Stick for Quality Control Purposes.

Every year about this time virtuallyevery house in the neighborhood gets broken into.  The crime normally happens at night.  It’s always the same perpetrator, or so it seems.  I’ve checked around, and I’ve worked up a physical description of the suspect.

He is a male, race is Caucasian, obese, with gray hair and gray facial hair.  Wears a suit, red in color.  Typical M.O. is entering residences through the roof area.  Known to steal baked goods and dairy products (i.e. milk and cookies).

I’ve instituted nightly patrols and sentry duty, as you see here from last night.  This crime ain’t goin’ down this year.  Not this time.  Not on my watch.  I got this.

So, Catman (aka Daddy) – takes Ainsley to work with him.  I stayed home, per my usual Modus Operandi.  Ainsley, Catman, Hooman Uncle, Hooman Grandpa, and another dude drive around a bit, to McDonald’s of course, and comes back to the work, leaving Ainsley in the Van (aka Angus Mobile), about 4:20 pm.  Then, about 6:30 pm, Catman leaves work, goes out to the parking lot, and hooman uncle, who is getting in his car, remarks that Catman’s van, (aka Angus Mobile) has its side door open.

Catman immediately rushes to the van, afraid, and expecting to find an empty van, with Ainsley gone.   A door left open, for who knows how long, and a 4 year old Scottie, of course she’s gone, maybe forever, maybe hit by a car, who knows what, right?  Well, the door was indeed open, wide open, but Ainsley was still inside the van, just sitting in the driver’s seat.

Don’t know how it happened…don’t know when it happened.  That van, a Chrysler, has had crazy electrical problems before…windows that roll open, windshield wipers that quit working, headlights that stop working, radios that go dark…all sorts of crazy things.  And the doors are electrical – and can be open from a little button on the remote control.  So we don’t know if maybe the door was opened by accidentally pressing the button just minutes before Catman went outside, or if had been open for hours by some crazy random electrical glitch.  All we know is we are all amazed that crazy Ainsley didn’t make a break toward freedom, like she did a couple of years ago when a fence gate was accidentally left open.

Anyway, everything is ok.  Pic below is tonight, after the almost tragic events, with Ainsley watching the “Amazing Race,”, one of her favorite TV Shows.  A show about travelling – which is funny, since she had her chance to do some travelling today and didn’t take it.

Staff says they won’t let us stay in the van anymore, and it will be traded in – soon. 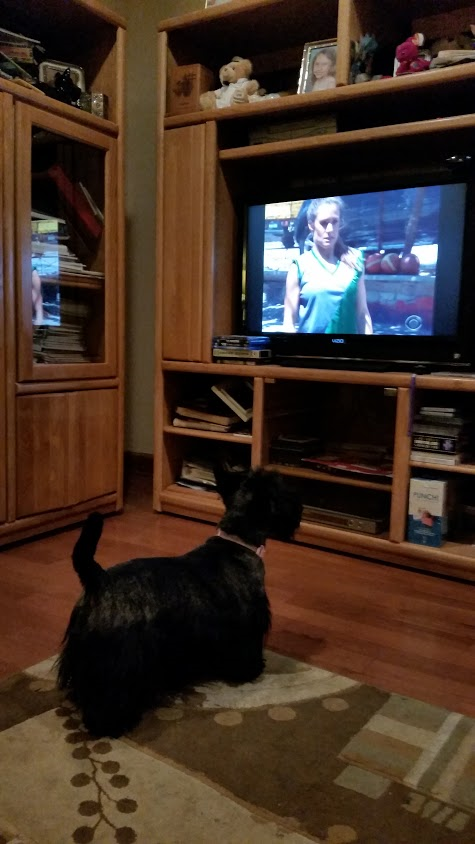