Back in 2010, when I first came to live at Angus Manor (now The Ainsley Institute of Scientific Studies and Advanced Bunny Killing), me and my brother Angus would go to the dog park often.

On that day, several dogs, including 2 pitbulls, were in the park when Angus and me arrived.  No sooner had we gotten in then fence then one Pitbull came after me.  No problem, I thought.  I promptly rolled over, which is universal dog language for “I’m Just a Pup – I submit to you, oh Attacking Dog” – and the attacking dog knows to back off.

Except this Pitbull didn’t play by those universal rules.

It took my rolling over as a sign of weakness (which it is)…and as a sign to kill (which it shouldn’t).  So Mama was screaming at the top of her lungs while the Pitbull’s hoomans were just standing there, looking quite stoopid.

Where was Angus and My Hooman Male Staffer (aka Catman),, you ask?

They were occupied to ANOTHER pit bull, that was related to the one attacking me.  But Angus – he wasn’t the roll over kind.  He was being attacked, but he was giving back as good as he was getting.  That Angus was always a giver, I suppose.

So Catman scooped up Angus, while fending off his Pitbull, and came running and got me away from my killer pitbull.

So we ceded the dog park that day to the Pitbull Duo.

And we didn’t come back much.  And I wasn’t the same at the dog park – more tentative – less joyful.  And as Angus’s Cushings Disease progressed, he wasn’t into ball playing anymore, so over the last few years, we rarely went.

Now that Angus has gone, I’ve visited the dog park a couple of times.  But since I don’t play ball, staff noticed I don’t really play with the other dogs like I did before the Pitbull incident.  So the staff didn’t think I cared that much for the park.  However, Wednesday night, after Ice Cream, we drove by, and Mama could hear a little perceptible whine from me as we drove by.  So Catman said, “Sweetie, I will take you tomorrow”  So that’s what we did.

So fast forward to Thursday.

There were several dogs there…a couple of small dogs, an Australian Shepard, a dog of undeterminate origin, maybe a Lab, and one or two others. 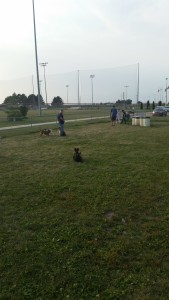 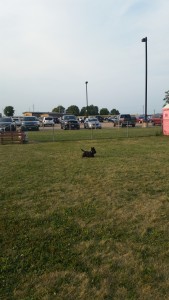 We were there about 10 minutes…I didn’t really play with any of them.  Didn’t associate with them really, but I watched them.  Just watched them from a few feet away.

But lo and behold, look who is coming in.  A PITBULL!  A full grown, probably 100  pounds worth of death dealing muscle brained Pitbull.  I sat at a distance, and watched the Pitbull approach.  If you look carefully, you can see the tan colored pitbull on the side of the fence about to come in.  I am watching intently.  Planning.  Calculating.  Plotting. 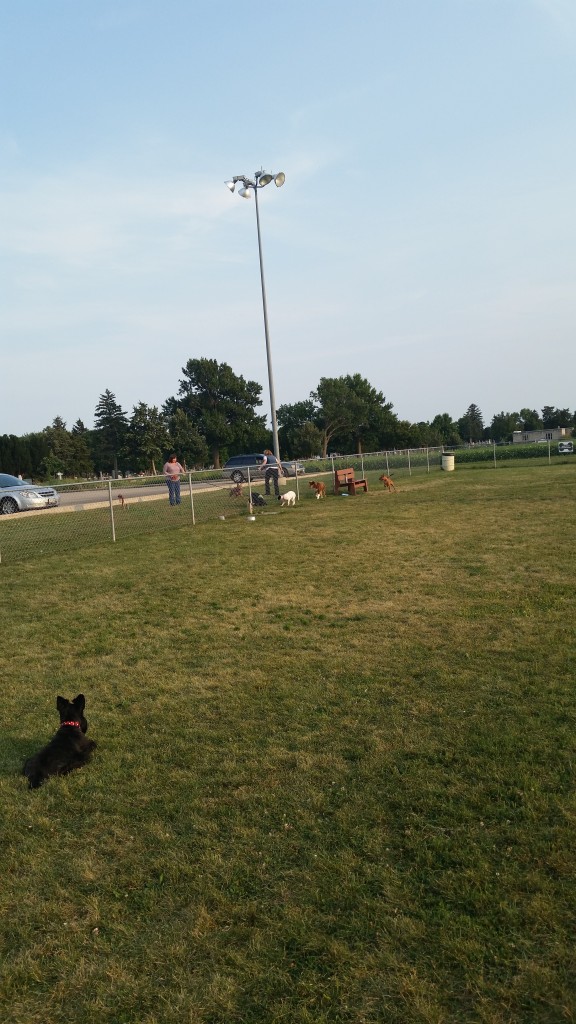 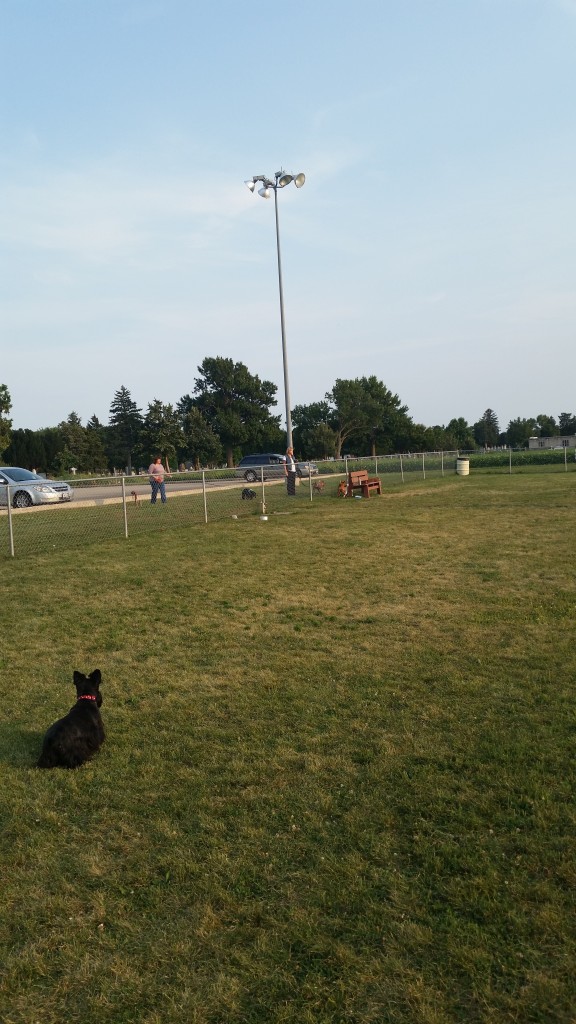 So in comes the Pitbull.  Catman is watching the situation carefully…but I run around him and go in for the attack!  GRRRRRRR  Bark!  The Pitbull then….he then…he then….ROLLS OVER!!!!  What do I do?  I Jump the SOB (literally, he is a Son of a B….cause he is a dog).  GRowling and barking.  Catman pulls me off.  Scolds me.  Pitbull goes back upright.  Stands up

BUT I’M Not done with you yet Pitbull!  5 years of grievance and resentment is coursing through my veins!

Then again.  And then Again!

Finally Catman takes me away.

Didn’t mess with any of the other dogs.  Just the Pitbull.  And I now have settled the score against The Pitbulls.  Scotties 1, Pitbulls 0!

I think I should get a promotion for this.